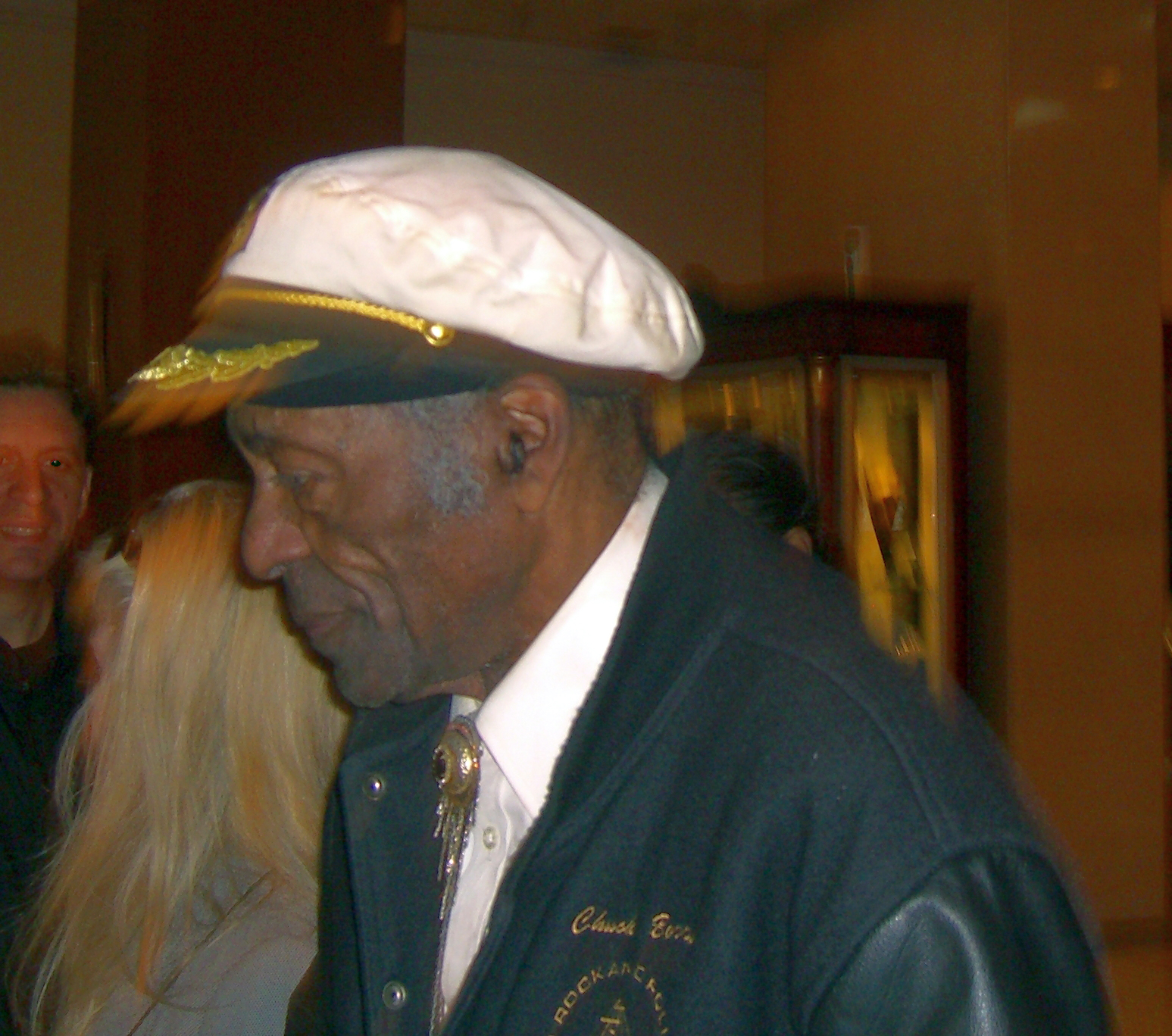 Sad news that Chuck Berry died today. It took me back to the one time I came accross him on my travels.

In 2013 we were lucky enough to tour Argentina and Uruguay with TV Smith. It was a mad tour, as they all seem to be, but great fun.

The tour finished up in Montevideo, a lovely, sleepy town that I’d written a song about, implying that the place was a non stop partying cross between Dublin, Ibiza, Berlin and anywhere else you’d like to throw in where the locals value a good time over sleep eight days a week.

In fact Montevideo has a lot more in common with Geneva where everyday seems like a gentle Sunday afternoon stroll in the park.

It turned out that the government of Montevideo were delighted with my portrayal of the local population as a bunch of 24 hour a day inebriates and decided to bestow on me the honour of becoming a “Visitante Illustre”, the equivalent of being awarded the keys to the city. The only other British musicians to receive this honour are Paul MacCartney and Elton John so it’s a big deal.

In particular they liked the video of the song which can be seen here.

So, after a wild night of last show of the tour celebration, with precious little sleep and a thumping head, off I went to the Uruguayan Parliament to collect my award. This entailed giving a speech in Spanish, – demanding under the circamstances.

Afterwards, as we walked up the stairs to the front of our hotel, the doors opened before us and an extremely sprightly, elderly black guy came through. He was cool. Dressed in a captains hat, bootlace tie and leather bomber jacket, he passed quite quickly on his way to somewhere important.

“That’s Chuck Berry”, said my wife Liz and by golly it was. I didn’t realise he was still alive at the time, let alone still touring the world and playing shows.

So, clutching my medal as the illustrious visitor to Montevideo I felt honoured to have received it, excited to have seen one of the original greats of Rock n Roll ……….. and a complete and utter fraud. Who was I to be honoured in this way when playing in town was the guy who invented the rock guitar solo, the widely acclaimed ultimate poet of Rock n Roll, the man who inspired The Beatles, The Rolling Stones, Bruce Springsteen and just about every other iconic musician of taste who picked up a guitar? Indeed you listen to all the great guitar solos on the early punk records and there is one man whose two string style is behind them -Chuck Berry.

I got over it though, and when I showed the hotel my medal they allowed me to check out later that evening, way after the official leaving time, without charging. A memorable day then, but they often are in South America.

(PS: There is a fuller blog I wrote about this eventful tour which begins here )

You can read part 5 of this blog here

And so to the ferry across the River Plate and the bus to Montevideo. I’d played here two years earlier with The Boys and had the time of my life. So much so that I wrote a song about it and, in particular, the ClashCityRockers bar where I’d spent most of the time hanging out.

The effect of the song was pretty much to big the place up and everyone was talking about going to this mythical location as if it would be the source of all happiness. “What have I done?”, I thought. “It’s only a bar. Everyone is going to be so let down”.

The gig was in the smallest venue of the tour with a suitably scaled down audience but the reaction was the loudest and most raucous. Tim was not allowed to leave the stage and nor where we.

There was also a first for all of us: an outdoors dressing room! Liz came into the four walled, lit up area, about the size of a normal room. It normally served as the grill area of the bar. “This has got a very high ceiling”, she said looking at the sky. “And it’s got a barbecue!”.

And onto ClashCityRockers for an after show drink. It didn’t take long for Alex to get up on the tables with Tim’s guitar and start taking requests, most of which he could sing and play to the delight of the locals. Everyone took turns to join in and goodness knows how long we were there singing and drinking. All I know is it was 7am when we left.

“How do you do this all the time?” I asked Valentina, wife of Hugo who organised the gig. “We only do it when you come”, she replied smiling.

“This bar is the best place in the whole world, isn’t it?”, said Alex to Tim as we made our way out. “Not far off. But then so was everywhere else”, was the reply which pretty much summed it up.

A truly superb week. New friends made, especially Jose on drums, Tommy and Juan on guitars, Chino the roadie and Mariano to thank for organising it all. Sad farewells made as the rest of the guys headed back to Buenos Aires.

Liz and I stayed on an extra day as I had a date with the minister to receive my “Illustrious Visitor” award. A charming lady as it happened, who made a welcoming speech which I responded to in Spanish without mishap. Then onto a TV station for an interview which, this time, I took the sensible way out and did in English.

As we walked up the steps to the hotel a very sprightly old black guy came down toward us. Dressed in one of those 50’s American jackets James Dean might wear, and a captain’s hat, he was the coolest looking 86 year old you’ll ever see.

“That’s Chuck Berry”, said Liz and by George it was. So, one of the greatest Rock n Roll poets and inventor of the rock lead guitar is in town and I’m the “Illustrious Visitor”?

In about 2011, as part of a South American tour, The Boys became the first UK Punk band to play in Uruguay. It was the beginning of a love affair for me with a small country on the other side of the world. Montevideo/South America: it sounds like a swinging, lively place. In fact it’s quiet. A little like a Sunday afternoon which lasts all week.

Once bitten -song written: click here to see it:

Well I’m glad to say they liked my depiction of the whole town as ravers. So much so that on returning a couple of years later, thanks to the efforts of my good friend Hugo Gutierrez, they declared me “Visitante Illustre”, the equivalent of the Freedom of the City. The only other foreign musicians to receive that honour are Elton John and Paul MacCartney.

After another long, long night at the “Clash” we trooped over to the Montevideo Parliament where I received the medal and had to give a speech in spanish. No mean feat after the previous night. You can see it here: